It might be a slight exaggeration to say I wouldn’t be the passionate reviewer and interviewer I am today had it not been for crossing paths with Jack Ketchum. Then again, maybe not. His only supernatural novel, She Wakes, was the first book I ever reviewed. The author was the first pro writer I ever interviewed. That seems like a long time ago though sometimes it doesn’t.
When I read of his passing via social media last week, it was as though one of his fictitious human monsters had hit me square in the gut. I knew he had battled cancer in the past and was undergoing treatment again, but… I was struck.
My first encounter with Ketchum was from when I was writing for a now defunct little publication called Insidious Reflections. Long story short, I volunteered to check out an equally now defunct online horror forum called The Red Light District where Ketchum was doing a Q&A session. This lead to me getting tasked to interview him for an upcoming issue of IR.  I remember panicking because this bestselling author who Stephen King referred to as the scariest guy in America was all but unknown to me at the time. It was bad enough I’d never interviewed an author before, but on top of that all I knew about Ketchum’s work was thinly stretched between his website and his reputation for creating gut wrenching stories that had a way of really getting under your skin.  The first of his books I read were The Lost, She Wakes, and The Girl Next Door. I was sold; at once hooked by the writing. Scared shitless of coming across as some newb who would somehow offend and piss him off I figured for sure I would end up becoming the next doomed character he writes about. 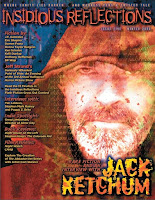 As it turned out, Ketchum was one of the most humble, approachable and kind human beings I’d come across. He had nothing to gain by opening up his thoughts to a hack journalist like me, yet he had no hesitation in allowing me to ask him anything while he fired back with his personal style of wit and candid honesty. I’ve interviewed him a handful of times since, read and reviewed more of his writing as well as covered his experiences with having some of his best known books adapted to the big screen. Along the way Jack Ketchum, the author, became Dallas Mayr, the man from which his pseudonym was born, and one I eventually came to call my friend and mentor. Anytime I asked to access his creative process, either to interview him about recent projects or for my own personal gains as a budding writer, Dallas never failed to offer help. He shared his thoughts freely and offered advice on everything from my writing to reassuring me that my 30’s were going to be fucking awesome after I once mentioned a slight concern about leaving my twenties behind me.
I met Dallas in person during the Festival of Fear in Toronto back in 2005 or so. I blew my convention budget on his books which he was happy to sign. We shot the breeze for a while and at some point he asked me to hang out and watch his booth for him while he made a mad dash to the ‘loo. In other words, I got to be Jack Ketchum for about 15 minutes. Luckily, we look nothing alike and fans weren’t fooled when I offered to sign their stuff. 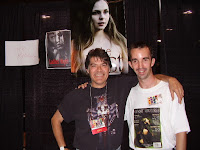 I remember when I threw a stag and doe party to have a bit of celebration and raise some funds for my upcoming wedding, Dallas provided two hand corrected book manuscripts for me to use as raffle prizes. His kindness struck again. That’s just who he was.
I last interviewed Dallas this past September for my blog. Within the interview he disagreed with a sentiment I had made about the world we live in being darker than ever before. He countered my perspective by suggesting that humanity, however slowly, is steadily moving forward, that it’s getting better. I like to think he’s right. I hope that he is and that he gets to watch it all from wherever in the cosmos he may be cruising along. I also hope he gets to enjoy his grandmother’s lentil soup  while writing to eternity. I’ll always be grateful to have called him friend and for all the times I was allowed to dig around inside a truly gifted dark and curious mind of one of the most courageous, impactful writer’s a reader could ever ask for. Rest in peace, Dallas. Travel well, Jack. Thanks always for your kindness and most of all for creating brutal, entertaining worlds that won’t soon be forgotten. 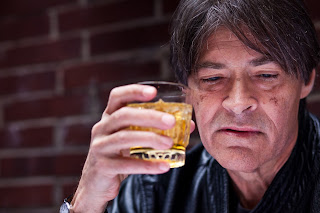 If you want to help make a difference and enjoy some great stories, you can pick up a copy HERE of Now I Lay Me Down To Sleep: A Charity Anthology Benefitting The Jimmy Fund / Dana-Farber Cancer Institute (Necon Anthologies) (Volume 5).

From his friend and webmaster, Kev: If you wish to make a charitable donation in Dallas’s (or Jack’s) name, please consider a no-kill animal rescue or shelter in your area, or elsewhere, particularly for cats. Dallas donated regularly to these, and they are near and dear to his heart.

Feel free to enjoy this audio interview we did a while back in which the powers of that famous Lentil soup are first discussed.