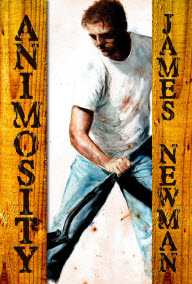 Animosity.  Defined by the Webster’s dictionary as:  “Ill will or resentment tending toward active hostility; an antagonistic attitude.”
James Newman’s definition is much more terrifying, through the heart and unforgiving.  We’ve all been there at some time or another during our lives.  The way people stare.  The way they point and whisper behind our backs.  Maybe some of them were once friends, good friends that we had come to know well and have even cared about once upon a time, but now they are in opposition of us and we don’t know why.  Could have been a rumor blown out of proportion.  Maybe the result of unrelenting peer pressure from someone who dislikes you for whatever reason and feels the need to convince others to feel the same way.  Or it could have been as simple as saying the wrong thing at the wrong time and thus having the very people around you spreading their misconceptions like a vicious plague.
For Andy Holland, the key character in ANIMOSITY, it was a matter of being at the wrong place at the worst possible time.  This is where Andy’s life begins to spiral painfully south.  Not that life was ever easy for Andy.  You try discovering your wife getting plugged in the rear by another man and see how easy things get.  It’s not easy for Andy who must settle for seeing his daughter on specified days of the week and then having to say good-bye when she goes home to her mother and the new man of her home.  No, things have never been easy for Andy but at least they were within reason, something he could understand for the most part.  And then he found a young dead girl too close to home and everything changed.
“Ten minutes ago I killed three of my neighbors.”  James Newman wastes no time with pleasantries as we’re immediately sucked into the chaotic world of small town America from the very first line of this book.  It’s with this intensity that Newman’s expert hand leads us through the gut wrenching tribulations of Andy Holland who only wants to enjoy his normal life as a divorced father who writes best selling horror novels for a living.
So what then when Andy makes his gruesome discovery?  What then when all fingers point at him from behind closed doors and, eventually, right in his face?  Where will he go when he has no place to run, no place to hide, and no one he can trust?  It was bad enough that Andy was always looked upon as the odd but friendly enough fella who writes scary stories.  But when his small time celebrity status is turned against him and people begin to dig in places they shouldn’t, that’s when faces begin to twist and people become revealed for what they truly are.  What would you do?
Each page of Andy’s hell drips with so much emotion and dark realism, that the impact of Newman’s imagination won’t easily be shaken off even, if not especially, after the last page has been turned.  Not that you’ll want to shake off the scattered remnants that this nasty little story will imbed in your conscience.  If anything this will be a book you’ll want to read again just to understand it under a new light.
For this reveiwer personally, there are books I have read that I enjoyed and quickly forgot, perhaps some more gradually than others.  But then there are the ones, ones like ANIMOSITY, that I can’t wait to let unfold in my mind as introspection kicks in.  Books like this are almost as much fun to complete and contemplate over as they are to actually be in the middle of reading.  Well, almost, but far from quite.  After all, with a book like ANIMOSITY the power is in the pains of discovery.  And these are the books that last.

According to James’ website, you may order from the following fine sources: