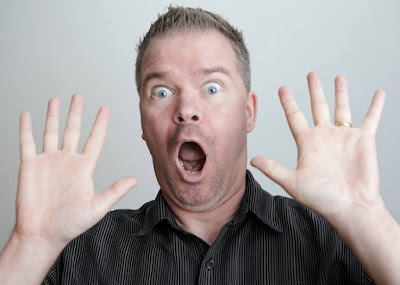 Jeff Strand balances the sharp line between terror and laughs like none other in the business and has over 30 published books to prove it, four of which have been previously nominated for a Bram Stoker award. At any time while reading Jeff’s work, he can have you laughing out loud in public one moment, then gripping the book tight in dreadful tension the next moment. Jeff has also made regular appearances as MC of the Bram Stoker Awards ceremony as well as master competitor of the always anticipated and often talked about official gross out contest. As a man who enjoys plying his creative talent in as many places as he can, Jeff has also dabbled in film work with the support of his film making better half, Lynne Hansen. After having followed Jeff from Florida to Georgia (at least virtually) Jeff was kind enough to grant me a few minutes of his time to pick his brain and see what kind of scares and shenanigans he has in store for us.
DARK BITES: I understand you recently made the transition from Florida to Georgia, effectively trading your oranges for peaches. If I may ask, why the change of scenery and how might the new environment affect your writing if at all?
Jeff Strand: In this case, I was the supportive spouse. My wife, 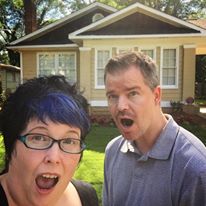 Lynne Hansen, had gotten into film making in a big way over the past couple of years, and the opportunities were far greater in Atlanta than Tampa. Since I’m a full-time novelist, all I need is my laptop and an Internet connection to do my job, so my reaction was pretty much, “You want to move to Georgia? Sure, why not?”

Of course, the process of moving suuuuuuucks, so the effect on my writing was that I wasn’t doing any of it! But now that we’re finally settled in, I’m back to work, and the effect of the new environment will be that I get to become part of a whole new writers community.
As much as fans of yours, including me, enjoy your mix of terror and humor, there are a few of your books such as PRESSURE and DWELLER, where any humor is reduced to a few fleeting scenes in favor of a steady stream of genuine scares and dark atmosphere. Do you tend to set out writing specifically one way or the other when a new story begins to formulate? Which do you find most rewarding to write?

Yes, with PRESSURE I purposely set out to try to write a “serious” novel. That was originally published by Earthling Publications, but Leisure acquired the mass market paperback rights with the caveat that they wanted future books to be in that style, and not my goofy horror/comedy stuff. So DWELLER was specifically written to be one of the “serious” ones. The lines kind of blur after that. WOLF HUNT was supposed to be Leisure Book #3, but they closed their horror line shortly before it was published. It’s a nasty, gruesome book that’s unquestionably a horror novel, yet it’s also funny from beginning to end. Is it a horror/comedy, or just a horror novel with lots of humor? I dunno. BLISTER is one of my funniest books, but I’d put it into the “serious” category. KUTTER has a silly premise (sadistic serial killer finds a Boston Terrier, and his love for the dog turns him into a better person) but I tried to write it without any jokes.
The stuff that leans heavier toward the comedy side, like FANGBOY, is more fun to write. But ultimately it’s more rewarding to have written something like DWELLER.
Speaking of humor and scares, what’s the funniest scene that comes to mind from an otherwise scary story that wasn’t yours?

The rabid squirrel attack that opens Joe Lansdale‘s BAD CHILI is the funniest scene ever written.
Considering your script work for the indie horror film, GAVE UP THE GHOST as well as a handful of other adaptations of your stories in the works, it’s safe to say you’ve dabbled in cinematic greatness and have enjoyed seeing your creative work taken in new directions. Considering all the media stages available for a writer to express themselves in this digital age, where do you see your creative efforts focusing on over the next few years given all the available media outlet options? 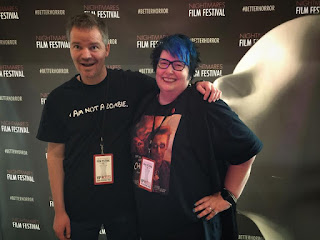 My focus will continue to be novels. Writing is my only source of income, and I’ve hit a point where if I write a book, I know that I’ve got an audience for it, and it’ll generate some cash. With movies, there are lots of factors completely out of my control. I did multiple drafts of a PRESSURE screenplay with, ultimately, nothing to show for it but some files on my hard drive. The feature film adaptation of STALKING YOU NOW (in which I’m not involved except for moral support) will be awesome if it’s completed, but right now it’s half-finished due to factors out of the director’s control. WOLF HUNT and DISPOSAL have both been optioned, and I will be positively elated if the movies get made, but to keep my sanity I have to compartmentalize them and focus on the stuff I can personally control. My wife is working to bring my forthcoming book COLD DEAD HANDS to the big screen. She wrote the screenplay and has total creative control. The movie is hers. The book is mine.
Which is not to say that I don’t WANT to work on other things. I’d love to do, for example, a web comic. The problem is that, though I’m fairly prolific, I’ve never hit a point where I say, “Wow, I’ve got so many books in the pipeline that I’d better stop writing them for a while!” That’s kind of the dream: to decide that I’m so far ahead that to put out more books will cannibalize my own audience, so I should work on other things. Not there yet. 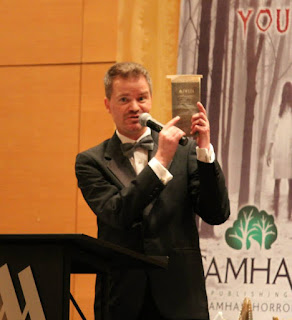 What can you tell us about any stories or plans for world domination you may currently have in the works, and where’s the best place folks can stalk you to find out more about what makes your creative brain tick?
The digital edition of my horror/comedy novella AN APOCALYPSE OF OUR OWN will be out very soon (the hardcover limited edition came out a couple of months ago from DarkFuse). My fifth young adult comedy, HOW YOU RUINED MY LIFE, will be out Spring 2018 from Sourcebooks Fire, and I encourage people to start lining up at their local bookstore now. COLD DEAD HANDS will be published by Cemetery Dance but hasn’t been given an official publication date yet. Right now I’m working on a couple of novels, SICK HOUSE (ghosts) and MILES OF NIGHT (vampire).
Stalkers should follow me on Twitter at @jeffstrand and visit my website at www.JeffStrand.com 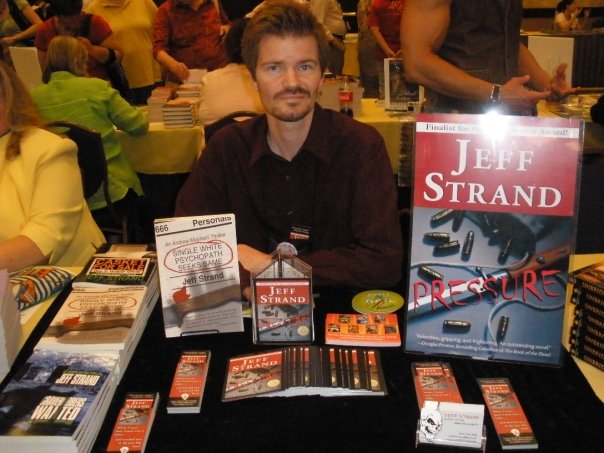