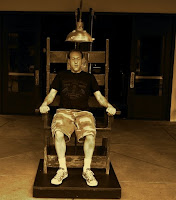 I first met Jay Mager  at a screening of Johnny Gruesome, which I covered HERE.  I interviewed Jay and enjoyed an after party where we got to further discuss our mutual love for independent film and horror in general.  Jay is as hardworking as they come and I always jump at the chance to help the man pimp his wicked wares. Plus, any excuse to post the title Mean Motherfucker and I’m in.
A bit of background
Jay Mager is an independent filmmaker who has been working in indie & genre films in his home town of Buffalo, NY since 2004. in this time, Jay worked in various capacities as a screenwriter, director, editor, producer and actor.
From 2004 – 2007, he worked on several music videos and commercials before becoming actively involved in the local horror & genre movie scene in 2007 when he served as 1st Assistant Director and Editor for cult filmmaker & author Greg Lamberson’s 2007 mini-movie Johnny Gruesome. Jay was also involved in Greg’s 2010 sequel to the 1980’s NYC cult classic Slime City, Slime City Massacre on which he was the 2nd Assistant Director.
Since 2008, he has also been writing, directing his own films, included the shorts; An Awkward Moment and The Pigman and his the ultra-violent, crime-noir Born To Die which was released in 2010.
Jay’s most recent project is Mean Motherfucker which was his submission to the 2012 Buffalo Screams Film Festival’s faux grind house trailer competition. Jay is currently working on editing an extended short film version of the trailer. He is also working on several projects that are in various stages of development, both his own films and collaborations with several local & national filmmakers.
And without further ado, Dark Bites is proud to direct you to Jay’s Mean Mother Fucker.  Watch out for the extended version which is sure to be even meaner.
No need to wash the red stuff off just yet.  While you’re here, go on and check out Jay’s other deviant creations down below:
BORN TO DIE: Trailer        THE PIGMAN: Full Movie!!!        JAY’S IMDB PAGE 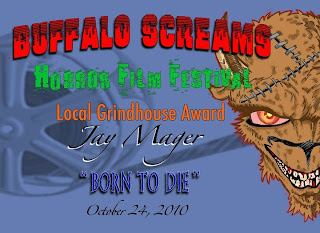