STEPHEN KING’S BATTLEGROUND
GAUNTLET PRESS
EDITED BY RICHARD CHRISTIAN MATHESON
_________________________________________
Get in the trenches and prepare yourself for a volley of insight and celebration as Gauntlet’s latest offering pays tribute to short story turned Emmy-winning first episode of Nightmares and Dreamscapes.
Stephen King’s Battleground throws its reader behind the front lines of an impossible world where little green men of guts and vengeance rule the day. Helping to lead the charge is scriptwriter Richard Christian Matheson, son of legendary pen-smith Richard Matheson, along with director Brian Henson, son of Jim Henson. Henson recounts his directorial experience and the many challenges involved in bringing Battleground into motion while actor William Hurt, the man of the hour, details what it meant to play part in this milestone production. Hurt shares his on-set improvisational skills while discussing the attention to detail that helped set this film adaptation apart from most of its ilk.
Visionary composer Jeff Beals lends a sample of his music score along with a few words to compliment exclusive rare pics, storyboard and, of course, Kings short story that birthed it all, Battleground definitely fires insight and diary-like retrospect from all cylinders without exception. In fact, this collection provides such an intimate immercification that you’ll feel as though you were actually there, a part of the experience and not just some rubbernecker passing by at the scene of the crime. 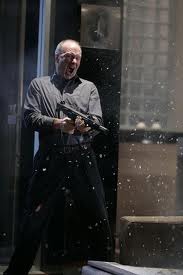 Possibly the only downside of the entire book is the absence of Stephen King himself, though he is unavoidably referenced a few times. I wouldn’t let that small detail get your guard down though since Battleground’s primary target is paying respect and tribute to an unforgettable union of several fine artists. And this it pulls off with fine execution, beautifully packaged in another outstanding cover by Harry O. Morris. War may be hell, but Stephen King’s Battleground will have you marching right back to the line even as you’re wiping the blood and the mud from your face.
Available now, you can purchase your copy from Gauntlet Press HERE.
As an added bonus, Gauntlet Press is giving its visitors the pleasure of enjoying the first part of an interview with Stephen King’s Battleground editor, Richard Christian Matheson, which you can check out HERE.