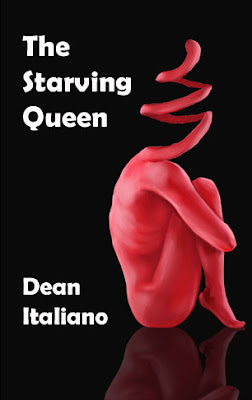 The Starving Queen, Dean Italiano’s most recent novel, is every bit as terrifying as it is true for far too many of us. The insidious force of Dean’s villain burrows into those she seeks when at their weakest moments, no matter how fleeting those moments may be. Her devious methods are invisible in every sense of the word, but she walks hand in hand with her prey all the same. Eternally patient, the Queen requires only the slightest faltering of confidence or self-image to dig a hole through anything positive her victims once believed in. That’s exactly what she does to young Jasmine, the high school soccer star who had it all until the Queen notices her for every strip of flesh she’s worth.

Between an inactive father who would rather work with his hands than his emotions, and an overworked mother who suffocates her daughter with best intentions, Jasmine clings to the popularity of her peers and the athletic future she worked so hard to achieve. At the peak of her potential and as a world of possibilities were about to open up for her, Jasmine’s doctor confirms the worst: Jasmine’s Arthritis has developed to unbearable levels. The best advice was to avoid as much physical impact as possible if she ever wanted tofunction and be pain-free as possible. No more running, no more soccer, no more life as she knew it to be. Jasmine quickly slides into a deep funk, but forces herself to move forward. Go to college, get the boyfriend, act the part of whatever normal was conceived to be. She would commit to whatever it took to hide the truth, to be invisible and, without knowing it, throws the door wide open for the Queen to enter.

The Queen knows what Jasmine needs and will measure her body, mind, and soul more thoroughly than any lover could. The Queen promises to guide her on how to fit those measurements perfectly, promises to love her until the end, where her new self awaits them. Feeding off Jasmine’s fears and deceptions like fine nourishment, the effects of the Queen’s influence gradually spreads beyond Jasmine to those closest to her. The Queen’s dominance threatens to pull them all down into a kingdom of despair ruled by her desire to strip them clean until that she may become whole again.

When images are so easily distorted and standards are raised beyond reality in a world rife with broken hearts and shattered spirits, only the bravest will endure. Considering how well Dean captures the underlying terror, The Starving Queen is definitely a case of the right book being written at the right time from an author possessed with all the right tools in which to tell it. Highly recommended.